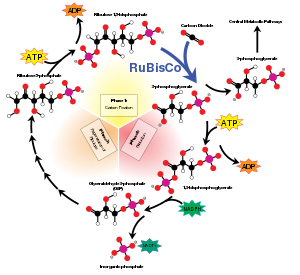 Let’s BIDS (Break it Down Simple):

RuBisCO
This article was at the request of a reader. Thanks Emma for the idea!

Photosynthesis means that plants take light (that’s the ‘photo’ of ‘photosynthesis’) and CO2 to create sugars for them to store or eat, and to fuel the processes that go on in their plant-body. (Most) plants also need soil and water.

Organisms have a lot going on in them, and they need energy to function just like a car factory that makes cars needs electricity and gas to keep producing and creating things. Well, each organism has a little factory in it; plants, which are autotrophs (they create their own food inside their bodies), have a factory that uses a few outside elements to both power the 'factory' and 'feed' the 'workers' (with sugar). In that respect, I guess it's kindof like Wonka's Factory and the chemical compounds are the Oompa-Loompas, while RuBisCO is sortof like if Willy Wonka had an assistant bossing them around and micromanaging.

This explanation might be missing some very delicate terms and steps, but it’s important to get the general overview before diving deeper into the devilish details.

RuBisCO is actually named after two different things. The “RuBis” comes from RuBP and the “CO” comes from the carbon and oxygen that is taken from CO2. RuBP is a 5-chain sugar and CO2 is carbon dioxide, or as you the reader know it, the exhaled air from our breath.

In order for the Calvin Cycle to keep on cycling, the "power" plant needs energy. RuBisCO takes the lifeless carbon from CO2, pairs it with the 5-chain sugar RuBP, and makes a chain of 6. This chain is unstable and breaks into two identical sets of 3. This 3-chain (3PGA) is what goes on to fuel the Calvin Cycle, a repeating cycle that creates energy for the cycle to keep going and food for the plant to keep growing. Later on, it gets converted into "G3P" (basically it gets rearranged just like these letters just got rearranged).

So, in summary, you need RuBisCO to make stuff happen. It’s called a catalyst, meaning it starts it all. Just like that friend that suddenly arrives and the party starts, or the idea-guy that gets that startup company off the ground and into the business. It does an important job of taking apart the used up old car-parts of the exhaled CO2, and grabs that engine, puts it with the 5-cylinder sugar string of RuBP and gets that engine revving on a 6-cylinder chain (albeit it a very rusty chain that will soon snap in half).

When the 5-chain RuBP combines with carbon from CO2, it turns out the combination basically creates a set of twins, at which point they fall apart into two sets of 3-part chains. Those babies go on to get sorted and used by ATP and NAHDP (that’s another lesson, let’s not get into it) who split them up down the middle and mix 'em up to do two different jobs (feed the plant or fuel the Calvin Cycle), a little like how my father got assigned to his branch of the military during Vietnam; the group to the right served as Marines, the group to the left served in the Army. There’s nothing particularly special about which group ATP and NAHDP sends to do one of two jobs, but it does require a few groupings to occur before they ship ‘em out to their assigned post in the plant . (12 groups that make up 36 chains, to be precise... but that's again another lesson).

Some fun facts about RuBisCO, it's one of the most common enzymes on the planet, it isn't effected by temperature (you are, by the way, in case you were wondering. You'll die if it's too hot or too cold, and tiny, little viruses and bacteria are even more sensitive, usually), and it will survive even after the plant is dead and will help with decomposition.

What? It will help the factory function by assigning where assets go and then pick apart at it's assets after it's shut down? Reminds me of a few corrupt investment bankers I know... From helpful parasite to scavenger overnight. (Just kidding).

Photosynthesis: conversion of light into food by plants; it also allows for the green color of leaves and results in the production of oxygen (O2). That’s right, we exhale CO2, plants steal back that carbon from CO2, and give us back the O2 so we can breathe. Thanks plants!

Enzyme: a type of protein, a tool that catalyzes (starts/turns on) and accelerates (speeds up) a chemical process.

Carbon Fixing: think of carbon, from carbon dioxide (CO2), as being ‘affixed’ to something else. In this case, carbon from CO2 is taken and attached to Ribulose BiPhosphate (RuBP), a 5 chain sugar.

Glucose: another word for sugar.

Autotroph: an organism capable of making it’s own food.

RuBisCO: Ribulose-1,5-bisphosphate carboxylase/oxygenase: the enzyme that catalyzes the reaction required to make the Calvin Cycle possible; combines RuBP (the “RuBis” of RuBisCO) with carbon dioxide (the “CO” of RuBisCO).

3PGA: 3-phosphoglycerate: this is what happens after RuBisCO combines RuBP with a carbon from CO2; it becomes “glyceraldehyde 3-phosphate” (G3P).